The ancient village of Qumran sits on the level ground near the shore of the Dead Sea.  The caves where the Dead Sea scrolls were found were actually in the barren hills adjacent to the village.  You can see the caves as dark holes in the hills. 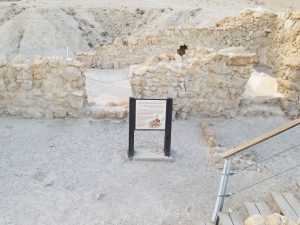 TREASURY ROOM.  THE SIGN SAYS, “AFTER HE HAS ENTERED THE COUNCIL OF THE COMMUNITY….AND IF IT BE HIS DESTINY TO ENTER THE COMPANY OF THE CONGREGATION….HIS PROPERTY AND EARNINGS SHALL BE HANDED OVER TO THE BURSAR OF THE CONGREGATION… (COMMUNITY RULE VI, 16 – 22).  THESE ROOMS BELONGED TO THE ADMINISTRATOR RESPONSIBLE FOR FINANCES AND THE COMMUNITYS SPIRIT, THE MOST IMPORTANT PRINCIPLE OF WHICH WAS COLLECTIVITY.  THREE POTTERY JUGS CONTAINING 560 SILVER COINS WERE DISCOVERED IN THIS ROOM.  THIS APPEARS TO HAVE BEEN THE CENTRAL TREASURY OF THE SECTARIANS.”

Caves at Qumran where the famous Dead Sea scrolls were found.