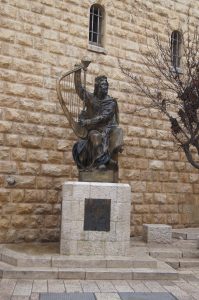 2 Kings 14:20 (NIV) “He was brought back by horse and was buried in Jerusalem with his ancestors, in the City of David.”

While this is the traditional site of David’s tomb, many biblical archaeologists believe they have uncovered the actual tomb nearby in the ancient city of David.  For an interesting video to see the actual burial site, take a look at the Joel Kramer video: https://www.youtube.com/watch?v=1jSMtQy5dWg